What is a stink bug? A lot of homeowners have asked this question too late. Stink bugs or Brown Marmorated Stink Bugs are a pest species that belongs to the overwintering pest category. The pest is native to Asia and new to the United States. They’re called stink bugs because they can release a bad odor when they’re stressed and crushed. The first stink bugs in the United States were located in Pennsylvania in the mid-90s. Today, they can be found across the country in states like Michigan, West Virginia, Alabama, Tennessee, and Hawaii.

Stink bugs can reach three-quarters of an inch but some are half an inch. They’re brown or gray and have a shield-like back.

Why Are Stink Bugs In My Home?

Is it winter or spring? If so, you have stink bugs because they’re overwintering pests. They entered your home before winter so they could survive. Stink bugs prefer being outside, but they shelter during the winter months. During warmer weather, they’ll stay outside and damage ornamental plants, fruits, and vegetables.

Although there are some concerns, stink bugs are not dangerous to humans or pets. You’ll soon find out that they’re a major nuisance and they can make your home stink. To avoid stink bugs releasing a foul odor, you need to be clever when dealing with them.

How To Take Care Of A Stink Bug Infestation?

Getting rid of stink bugs requires skill. If you do something wrong, there is a good chance that you’re going to smell a foul odor. For this reason, it is not a good idea to crush stink bugs. Instead, you need to be gentle and wise. One way to deal with one or two bugs is by turning on your vacuum. You can suck up the bugs and dispose of them later. If you have twenty, thirty, or hundreds of stink bugs in your home, you’ll likely need help from us. We can deal with stink bug infestations of all sizes so call us.

Could I Eliminate Stink Bugs By Myself?

It is generally not a good idea to tackle a stink bug problem alone. The path is too rocky and too many things could go wrong. If you want to protect yourself and your loved ones, call us. Too many DIY products are ineffective. If you have one or two bugs, you can get rid of them easily with a vacuum. Just remember that you should call an exterminator when you have a large infestation.

Our services come at standard prices. As a result, the amount you’ll pay will be based on several key factors, including the size of the treatment area. If the standard services are suitable, we’ll charge based on the size of your home.

Once you’ve removed the stink bugs from your home, make sure they never return. To do that, you should find out how to prevent stink bugs from entering your home. Ultimately, you need to seal your home’s exterior walls and eliminate gaps and cracks on exterior walls. Even then, there is a chance that a bug or two will enter your home when the door is open.

When Can Your Exterminator Get Here?

Contact our office to set up an appointment. Once you’ve done that, expect to hear from us in 48 hours or less. 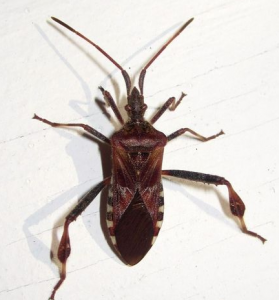